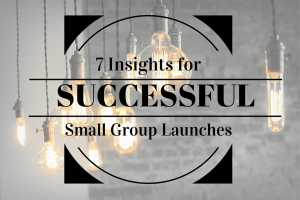 I’ve seen small group launches go really well. And, I’ve had churches come to me after the launch or a series of launches and ask for help. Not so secretly, I really wish I had the opportunity to talk to them first. Any church only has so many opportunities to successfully launch groups and connect the majority of their members. Failure to launch in these circumstances is fatal for future launch attempts.
As I’ve worked with churches, large and small, across North America, I have discovered seven things that help churches successfully launch groups. By having these things in place, you have a better chance of recruiting the leaders and coaches you need, forming groups that will last, and make your senior pastor a raving fan of groups.

The right or wrong topic will make or break your launch. Think about who you are trying to connect: church members or folks in the community. If you chose a mature topic like tithing or fasting, more than likely you’ll have a tough road getting your members to participate let alone anyone from outside of your church. Think about topics that would be a felt need for your people and your community.
I’ve coached churches who have done a two step strategy with this. The first campaign was used to connect and cast vision to the church body. The second campaign was designed for the church to reach the community. For instance, Capital Area Christian Church in the Harrisburg, PA area launched a New Year’s series in 2015 called Manifesto. This series laid out the vision and mission of the church to their people. Then, after Easter 2015, the launched a second series called Monsters Under the Bed, which addresses the topic of fear — now that’s a significant felt need. In the second series, they connect more in their congregation, but also quite a few in their community.

Insight #2: Lower the Bar on Leadership.

That doesn’t mean throwing people who are completely unprepared with no coach into the deep end. When I say, “lower the bar” I mean temporarily setting aside your requirements for short term series groups. These groups aren’t advertised. You don’t send people to these groups. You invite people who are open to doing a study with their friends give small groups a try. Maybe for the first time.
If they have a good experience leading a group, then invite them to do more. Eventually, you will offer them a leadership track to make them official leaders. If things didn’t go so well for them, then thank them for giving it a try and encourage them to try another ministry.
As Neil Cole says, “We need to lower the bar on what it means to be a leader and raise the bar on what it means to be a disciple.” Not everyone has a leadership gift, but we are all called to “go and make disciples.” No one is exempt from the Great Commission. By giving your people an easy to use tool like a video-based curriculum, you can help your people live in obedience to God by equipping them for what God commands them to do. When did this become an option?

If your pastor is willing to give “airtime” in the weekend service to talk about groups, recruit leaders. If your pastor gives you airtime for multiple weekends, recruit leaders. If you are recruiting leaders, people will figure out the church is launching groups or doing a church-wide campaign. Don’t waste this precious airtime promoting groups. And, certainly don’t waste this precious airtime promoting classes and Bible studies that are on their way out. Recruit leaders.

Insight #4: Keep the Invitation and the Response Close Together.

People only think about church when they are in church. When the pastor invites folks to lead a group, then provide a way IN THE SERVICE for them to respond. Don’t send them to the lobby. Don’t send them to the website. Don’t send them out the door without collecting their response.
Whether you use a response card which is placed in the offering, an online survey taken on a smartphone, or texting a message to a designated number, you want to get a “Yes” from every willing person before they head out the door. If you send an email invitation from the Senior Pastor during the week, provide a link for them to sign up online.

Insight #5: Shorten the Distance Between Their “Yes” and Starting the Group.

Since we’ve already waved the requirements, the new leaders are already one step closer to starting their group. Whether the Senior Pastor encourages them in the service to begin inviting people to their groups or they are instructed on how to form their groups in a briefing immediately after the service, don’t allow any time to pass from when they say “Yes” to when the new leaders put things in motion.
The longer you wait, the sooner they will get cold feet. Don’t schedule a briefing or orientation a month from the invitation because it’s efficient. I would rather host three briefs per weekend for three weeks in a row with a handful of people at each than wait a month and lose half of the prospective leaders in the process. You’ve made it easy for people to start groups, now get them started!

Insight #6: Recruit During the Month Prior to Your Launch.

While you can promote well in advance of the series, don’t take signups for months. I learned this from a PTA president. Promote early and often, but only take signups right before the event. Otherwise, you can recruit and recruit only to discover most people will sign up in the last three weeks before the start of the launch.
One month out gather your existing group leaders to give them the first look at the series. I call this a Sneak Peek. This will honor your leaders by giving them an exclusive opportunity to check out the new study. This will also take pressure off of your new leader briefings by briefing your established leaders ahead of time. This is also a great opportunity to recruit your established leaders to coach new leaders.
Then, recruit new leaders for the three weeks leading up to the launch. Not everyone attends every weekend, so you want to ask for more than one weekend. Also, some people will need time to warm up to the idea. The first week they might say “No” to leading a group, but by the third week, their “No” might turn to a “Yes.”

Insight #7: Your Senior Pastor Must be Your Church’s Small Group Champion.

Going back 20 years, I used to personally recruit every small group leader in my church. While I had stellar group leaders, my church also got stuck at 30 percent of our people in groups. Then, I asked my Senior Pastor to invite people to lead groups. We doubled our groups in a day. I have not personally recruited another small group leader since 2004. And, I served in a whole other church since then!
To gain your Senior Pastor’s interest in groups, put your pastor on the curriculum. If you do, your pastor will be more interested in groups because he will want people to use his curriculum. Also, your people will be far more interested in joining a group, because they already like your pastor’s teaching.
I know I gave you these seven insights in rapid fire succession. If you hit these seven points, you will have a great small group launch. If you want to hear more, then register for my next webinar at allenwhite.org/webinars.