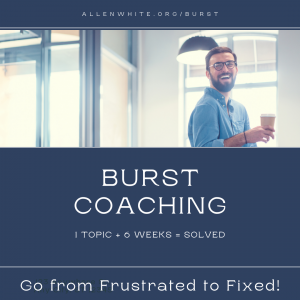 Do you ever have an issue you just wish you could talk through with someone? Maybe you’re not ready to sign up for a big coaching commitment. You just need to pick up the phone and spend a little time working something out. Do you ever have an... 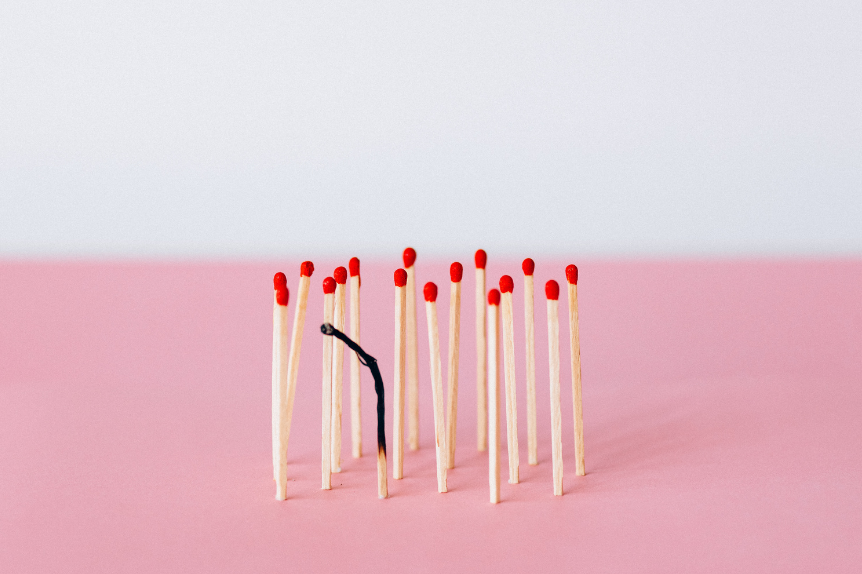 You’ve probably got a story about how you’ve tried coaching group leaders and how it failed. I actually have a few of those. But, let me assure you that coaching can and does work. You need coaches. You must multiply yourself in order for your small group ministry to grow. So, let me help you get out of your own way when it comes to coaching just like I had to once upon a time. Here are the three biggest reasons that coaching fails.

You’ve probably heard coaches complain that their leaders won’t call them back. As much as you try to reassure your new leaders that when their coach calls it’s not a spam call about their car’s extended warranty, the reality is that small group leaders will only take time to call people who are important to them about matters that are important to them. The leaders aren’t to blame. The challenge is how coaches can become important to your leaders.

First, match your coaches up with small group leaders they already know. If they already have a relationship, then you’ve got a great foundation for coaching. If the small group leader came out of another group, then the obvious coach is the leader of the group they came out of. If you are starting a new coaching structure, then ask your coaches which leaders they already know. Let the coaches choose their leaders (or even let the leaders choose their coaches). Either way you do it, start with relationship. The only exception is coaching close relatives. Once I allowed someone to coach his son-in-law. I had to unplug that rather quickly and apologize profusely. Ben, I am still sorry. Other than in-laws, start your coaching based on established relationships.

When our church started groups, I led the briefings and the training, and then assigned the new leaders to the coaches. This did not work. My coaches complained that this was like cold calling. They were right. It was! To make coaching better (and avoid a revolt by my coaches), I started including coaches in the briefings and training. For the new leader briefing, the coaches were instructed to invite the new leaders they knew to join them at a round table. (See we were putting point #1 into practice). Then I introduced the coaches as “important people who would help them get their groups started.” I gave them reason to call their coaches back. Lastly, after I introduced the coaches, I left the room. The coaches did the rest of the training.

If your coaches are struggling to connect with their leaders, then you need to check the temperature of the relationship. The closer the relationship, then the better the coaching. The more unreturned calls, well, you do the math.

If your leaders are not responding to coaching, then they’re probably being coached in the wrong way. Probably the second biggest mistake in coaching is attempting to coach all of your leaders in exactly the same way. Your leaders have very different needs and abilities depending on their experience. Coaching should start with what the leaders need. Don’t go into coaching with a prescribed coaching process that you will inflict on every small group leader. That simply won’t work. After all, ministry is not something we do to people.

Are your leaders starting their very first groups? Then, they will need direction and support to get their group started. This might involve weekly contacts. It will certainly involve a great deal of encouragement. But, if you’re leaders have led for a while, this is the last thing they need. In fact, if you attempt to coach an experienced leader in the way you would coach a new leader, don’t be surprised if that experienced leader disappears, even if the leader and the coach have a good relationship.

Think about your children. If you have a variety of ages of children, you don’t treat them the same way. Infants depend on you for everything. Teenagers and young adults can hopefully do more on their own. In fact, if you attempt to tell a young adult what to do like you would tell a younger child, you’re probably in for a fight. At this stage, you ask more questions and help them reach their own conclusions. You also wouldn’t attempt to teach your toddler to drive the car. In the same way, coaching must be appropriate to the leader’s experience.

When you think about your leaders, who is just starting out? What type of coaching do they need? Then, who’s starting a new group, but has experience leading groups from previous groups or another church? They don’t need to go back to kindergarten. Which leaders have been around for a while? They probably don’t need to be told what to do. But, they do need support in difficult circumstances and accountability to fulfill their group’s purpose.

When it comes to coaching, one size does not fit all. If you are attempting to coach all of your leaders exactly the same, then you’re making a big mistake. Start with what your leaders need, then coach from there.

I’m not going to accuse you of this last one, but I will explain how this was my problem. I recruited people with good character and great small group experience to coach my leaders, but I held them back. They were more than capable of coaching and supporting their leaders, but I kept them on a short leash. They had given no evidence of doing a poor job coaching leaders or being untrustworthy in any way. I was just insecure. Under the guise of being responsible for the small groups, I assigned tasks to my coaches but I did not give them the authority to lead. “Hi, my name is Allen, and I’m a recovering control freak.” As the pastor, I felt that I needed to be involved in everything and know everything that was going on. No one really needed my intervention as much as I needed to be needed. I believe that’s called co-dependency. The result was that my leaders were okay but not excelling, my coaches were frustrated, and our groups were stuck with only 30% of our adults connected. My coaching wasn’t working, and
I was the problem.

Some churches have the staff and budget to hire all of the pastors they need to coach their small group leaders. Other churches have a simple church approach and just don’t offer very many ministries. Their staff is devoted to group leaders. Good for them, I guess. But, whether coaches are paid or volunteer, these lessons apply. How are the relationships going between coaches and leaders? What kind of coaching do your leaders need? And, are you empowering others to lead and getting out of their way?

It might seem easier to coach and train small group leaders all by yourself. But, I guarantee you that it’s not better. 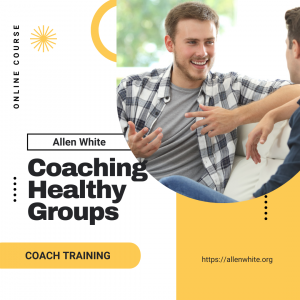 Most churches just can’t hire enough staff to support all of their group leaders. If you can, then you’re pretty lucky. But, recruiting and training coaches seems like a lot of work. Who do you recruit? How do you develop them? What do coaches do anyway? The default is to do it all yourself. And, this usually translates to lining up your leaders in rows and training them. But, there’s a problem.

Your leaders have different levels of experience, different needs, and different questions. In meetings, you tend to treat everybody the same. This either leaves the experience leaders bored or the new leaders overwhelmed. And, did I mention that people hate meetings? They do!

​This 4 session online course will train small group coaches in their role of supporting small group leaders and their groups.​ Allen White will help you take the guesswork out of coaching. You can attend this training yourself, then share it with your coaches OR bring all of your coaches along for the same price! It’s just $97 per CHURCH!

These sessions are yours to keep! You can access the recording of the sessions at any time to use with your coaches.

This 4 session live online course will train small group coaches in their role of supporting small group leaders and their groups.

These One Hour Sessions will cover:

After the Sessions, you will have access to the video recordings — forever to review and use to train your coaches! 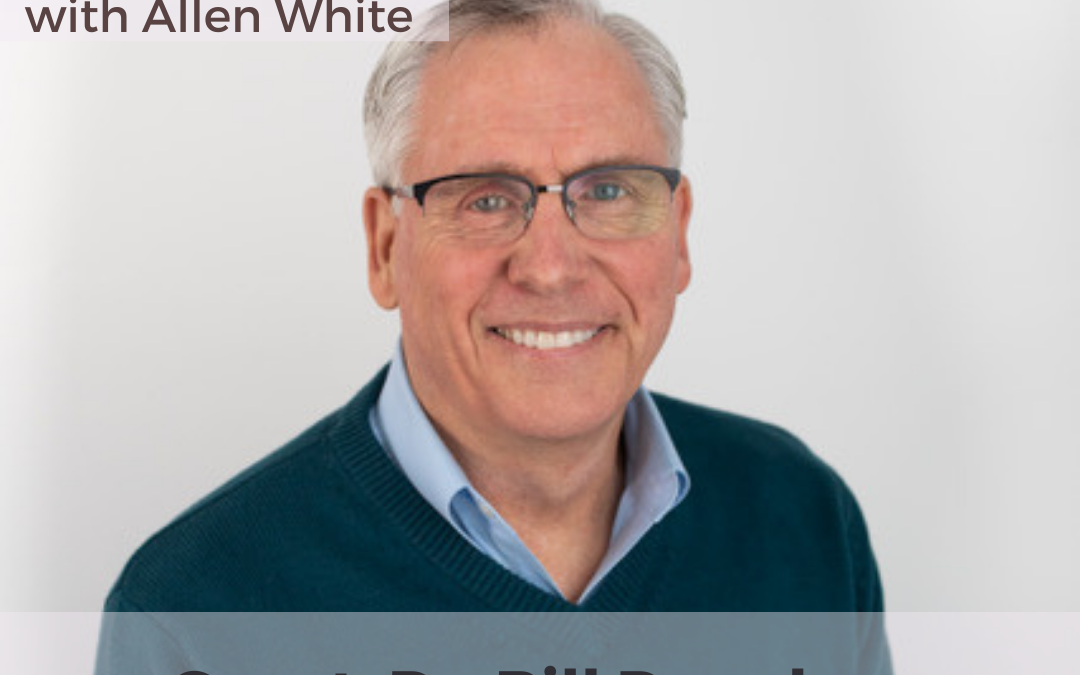 Episode 11: Dr. Bill Donahue on Coaching Leaders at Every Level

After working with P&G and PNC Financial Corp., Dr. Bill Donahue pastored in churches in Pennsylvania and Texas. He then joined the Willow Creek Community Church & Association (aka Global Leadership Network) for 18 years as Director of Group Life and Leadership, training leaders in the US and globally.

Bill has authored over a dozen resources including the best-selling Leading Life-changing Small Groups and Coaching Life-Changing Leaders.

3 Practices that will Transform Your Leadership Culture

Ready to get started on your coaching structure? Join the Coaching Exponential Groups Online Course. The coaching course is available at any time, but the offer in this video expires on 2/19/2021.