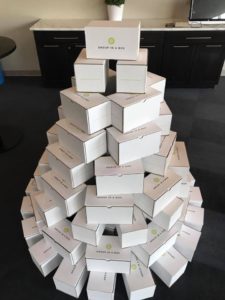 Pretty curriculum boxes appear to be the new hot thing in small group ministry. Don’t get me wrong. They are nice. It looks like Christmas! This tool is a great draw for potential group leaders.
Our church did something similar back in 2004. We had overbought curriculum for the Fall series. I bought gift bags and tissue paper at the dollar store and added the curriculum. No coffee. No bookmarks. No snacks. To be honest, the tissue paper was debatable. I think we made 31 bags. Why 31? Because that’s the number of flavors at Baskin Robbins. No, we had 31 sets of curriculum left after the HOST homes were recruited.
People were invited to grab a bag, gather their friends, and start a group. Those bags went fast. In fact, we had to stop offering them after our second service. They were gone.
The dynamic of group formation had changed in our church forever. No longer were people excited about joining groups. They wanted to start their own group. (You can read more of this story in Chapter 1 of Exponential Groups: Unleashing Your Church’s Potential. Download the chapter here).
Launching dozens to hundreds to thousands of new groups is pretty easy in the first six weeks. But, once you have the low hanging fruit, things are a little more uphill from there. Now, you could continue to offer a new box or bag of curriculum every quarter. It can also seem like you’re making progress, since your numbers are up and to the right. In many cases, however, you aren’t adding groups. You’re churning them. (Read more about Disposable Groups). If only a colorful box could make a small group ministry strong.

One of the great benefits to the group in a box is that anyone can do it. This method will create a ton of new groups in a very short period of time. I am a big fan of momentum. Get people out of their pews and into their neighborhoods. Launch an army of new small group leaders (or whatever you want to call them.) I am with you.
Groups, however, cannot live by pretty boxes alone. In a recent conversation with a pastor I first met six years ago, I was disheartened to learn that their group launches were keeping their leaders at the level of perpetual newbies. Many of the leaders had started six years ago and took a “box” every time it was offered. But, their leadership had never grown beyond the box. Now their group involvement was declining.
There is a time to delay leadership requirements and extensive training. This helps to get people who never imagined being a leader actually leading. But, there is also a time when leaders need to grow up. Requirements need to reappear. Extensive training should be offered.
If groups are only assimilating year after year after year, they become truly handicapped. What helped the groups to start will not help the groups to grow. Where are the disciples? Where are the leaders? Perpetual newbie syndrome doesn’t get the groups there.
Diapers are great when your kids are small. They’re not so great when they’re six years old.

I’ve seen many small group ministries get into trouble because there is no structure to support their growth. If you launch groups well, you will very quickly overwhelm any kind of coaching structure you have (or don’t have). This was the case when we doubled our groups in one day. Our inadequate coaching structure couldn’t handle the new growth. Quite a few groups ended up unnecessarily as casualties. We simply weren’t ready for that kind of growth.
It’s easy to assume that one small group pastor or director or a small coaching team can accommodate the wave of growth that’s ahead. This does not work. If the new leaders are not supported from when first commit to leading, many of the groups will never start. The new leaders will become discouraged or overwhelmed. With no one to turn to or only a “phone a friend,” many groups will end before they’ve begun.
We all know that leading a group is as easy as inviting a few friends and providing some refreshment. We also know that it’s not that easy. Soon we discover that a few of our friends have problems. Some have needs beyond the ability of the leader. They could call the pastor, but if the leaders of your 300 new groups (or 30 or 3,000) all call the pastor, what’s your life going to be like?
Before you distribute a single box for a new group, have a coach in place for that group. It may be all hands on deck with your established leaders. A caring person who is available to coach a new leader will determine the group’s success or failure.

If you don’t have a next step for the new groups, then don’t take a first step. When people are invited to gather their friends and do a six week study, guess what happens at the end of the six weeks? The groups end.
But, the groups don’t have to end. The key is a new pretty box that appears in the middle of the current study. If they’re new groups, don’t give them choices of what to study next. Just tell them what to study next. If they’re experienced groups, then let them go back to normal.
If you offer a next step as described above, then get the group to decide about going forward before the current study ends. Unless they decide before the end of the study, chances are the groups won’t continue.

Tying a Bow on It

I have no argument with innovative ways to get groups started. I think a group in a box is a great incentive and attraction for people starting new groups. The issue comes when there’s not a plan behind that initial start. Some churches have been perpetuating a low bar of leadership and a quick start to groups for so long that their ministries are actually dying out. What once made them great is now handicapping them. What comes after the pretty box?