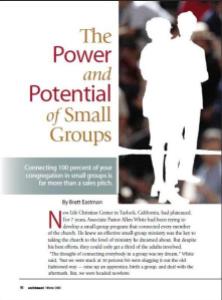 The Power and Potential of Small Groups

This article is from a few years back and recounts my experiences at New Life in Turlock, California and Brett Eastman’s experiences at Saddleback Church as Small Groups Pastor.

New Life Christian Center in Turlock, California, had plateaued.For 7 years, Associate Pastor Allen White had been trying to develop a small-group program that connected every member of the church. He knew an effective small-group ministry was the key to taking the church to the level of ministry he dreamed about. But despite his best efforts, they could only get a third of the adults involved.

“The thought of connecting everybody in a group was my dream,” White said, “but we were stuck at 30 percent.We were slugging it out the old-fashioned way — raise up an apprentice, birth a group, and deal with the aftermath. But, we were headed nowhere. Read more…

The Power and Potential of Small Groups 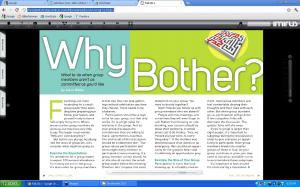 What to do when members aren’t as committed as you’d like…Check out my latest article in Christianity Today’s Smallgroups.com Digizine. It’s on page 30. Obviously, they put the good stuff in the back.

How to Beat Small-Group Burnout

Check out my latest article on Christianity Today’s Smallgroups.com:

Why reconnect members who are already connected?

At New Life Christian Center in Turlock, Calif., our desire is to connect 100% of our regular attenders in small groups. Many obvious reasons compel us to do this: assimilation, discipleship, span of care, and so on. What pastor wouldn’t want that?

At the invitation of David Larson, our senior pastor, many new small group hosts stepped forward to start groups. But, then we ran into some issues: rotating shifts and odd schedules; shy spouses and long commutes; special-needs children and reluctant leaders.

We made an interesting discovery when our church took the Purpose-Driven Health Assessment to gauge the growth of our congregation. Typically, we had overall high marks in Worship and Fellowship and low marks in Evangelism. We decided to break down our results according to who was in a group and who was not. Our thought was that people who are not in groups would become more spiritually healthy if they joined a small group. The results surprised us.

We used to see our church as hundreds of disconnected souls in desperate need of community. What we discovered is that everyone in our church is connected to someone: a family, co-workers, customers, neighbors, friends and acquaintances. Maybe a few people who recently moved to the area lack these relationships, but most people have them.

Our next challenge became getting these groups of connected people in our church to do a small group study together. The solution was simple: Pastor Dave invited anyone who would like to do the study with their friends to take the materials after the service. The Experiencing Christ Together DVD’s and study guides went like hot cakes. In fact, after our second service, we ran out of materials.

One new host named Rick told his Community Leader that leading his group is the best thing that he’s done. Rick is probably one of our most passionate leaders, but he never would have done it without the DVD. During that small group campaign, the pastoral staff had never met Rick. But, he discovered something that he loved and did it with all of his heart.

When we ask people to join a small group, think about what we’re really asking. First, we ask them to do a 6-week Bible study, probably for the first time. Then, we ask them to take an extra hour out of their week. And, we ask them to spend this extra hour doing the study with a group of strangers. Sounds like a recipe for failure, doesn’t it?

By inviting our members to do a new thing (the 6-week study) with people they’re already connected to, we gave them an excuse to get together with people they already know and love. They’re doing a new thing in their comfort zone. Not only do these groups form faster and better than any other connection strategy, these groups actually last longer. They’re already a group!

Three women who meet every Thursday for coffee at Starbucks are now meeting every Thursday morning at Starbucks and doing a Bible study together. Employees in the break room of an overhead door company spend their lunch time doing the small group study. Bored commuters sitting on a train from Central California to the Bay Area began spending previously wasted time studying God’s Word together. The group has become so popular they now take up an entire section of the train.

The only way to grow these groups is to get to know the hosts. Each of these new hosts receives training and support from a small group coach that we call their buddy. Remember the buddy system? The small group buddy is a leader that has some experience — at least one 6-week study’s worth. Their job description is to call the new host each week after their meeting to see how it went, pray for them, and answer any questions they might have. Each buddy receives the support of a Community Leader, if anything major comes up.

In the fall of 2004, 40% of our new small groups at New Life started by inviting our church members to pick up the curriculum and get together with their friends. In our current study, 100% of our new groups have started this way.

What’s our worst problem now? We have to convince them that they are actually small groups. But, that’s the least of our worries. 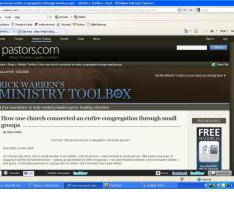 How One Church Connected an Entire Congregation Through Small Groups

“Connect 100 percent of your congregation into small groups.”

Our church was stuck: Only a small number of our adults — just 30 percent — were involved in small groups. After seven long years of slugging it out the old fashioned way — raising up apprentices to birth new groups — we were headed nowhere. Only one leader started a new group. Connecting everyone in a group was my dream, but it seemed only a pipe dream.

Then, 10 months ago, I attended a conference for small group coaches. The speaker, Brett Eastman, shared a new idea: groups can multiply, without dividing, by recruiting overlooked people to be hosts. This is called the host model. I was intrigued because none of my leaders had been able to recruit apprentices in their groups.

At the workshop, Kent, a coach from a Las Vegas church, shared how they connected large numbers in their congregation in a relatively short period of time using the host model. Not only did they assimilate great numbers of their congregation into small groups, but they also reached their community through small group community. I thought, “Maybe this really could work.”

On the drive home, I thought about what my senior pastor was most passionate about. With the recent release of The Passion of the Christ, he was planning a new sermon series. I thought, “Why not launch small groups based on The Passion?” When we did, we went from 24 to 44 groups in one day! This was great progress for a congregation of 800 adults.

From the pulpit, my senior pastor invited all members of the congregation to host a group for a 6-week study. It took off from there. In our post-Easter campaign, we added 25-plus new groups.

For our fall campaign, we started recruiting hosts, and our pastor aligned his weekly messages with the study our small groups were using. Then, we took 50 verses from the Bible and asked 50 members of our church to write a one-page devotional. The high participation awed us. Our pipe dream had become a reality. More than 100 percent of our average adult attendance plugged into a group.

It isn’t just about the numbers, though. Each number represents a life. When one man invited his co-workers to join him for a study on The Passion, two of them accepted Christ. I asked one host, “What motivates you to continue your group?” He said, “My dad is showing up.” His dad turned his back on church years ago; although he wouldn’t come to a service, he attended a small group at his son’s house. This was his first step back to God.

Our small groups also began to reach out beyond our congregation, serving hot meals to the homeless every Friday night. One host took her small group to a local women’s shelter. Individuals wouldn’t volunteer alone, but they were willing to serve with their group.

“Connecting 100 percent” was far more than a sales pitch; it was the first step in reaching beyond the walls of our church and connecting our community.

What’s the Next Step?

New study to start groups or sustain groups after a church-wide campaign.

Should a Senior Pastor be in a Group?

How Many Groups Should Your Church Have?

What are Successful Pastors Doing to Grow Their Groups?

Success! Now check your email to confirm your subscription.