For churches who observe Lent, the season between Ash Wednesday and Easter, it’s a common practice to deny oneself of something during the Lent. Now, I’ve heard of people 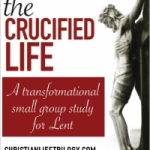 giving up things as frivolous as watermelon during Lent, which isn’t in season anyway. But, others take this serious, and deny themselves of something of importance to them. Why not give up your small group for Lent?

Now, while my proposition may seem counter-intuitive, this is what I mean — Ask everyone in the group to take a break for the six or so weeks of Lent to help start other small groups. Whether your church is doing a specific Lenten campaign like The Crucified Life by Charlie Holt (catch our interview here) or another alignment series, this is a great way for group members to unselfishly give up their group to help start a new group. Of course, they are welcome to return to their original group after the series is finished. Spoiler Alert: 80 percent who start a group this way will stay with the group they helped to start. Don’t let offer that detail or else no one will do it!

Giving up a small group for Lent is not just good for helping start new groups, but also will breathe new life into established groups whose numbers have decreased or have become ingrown. After all, joining an established groups is a lot like getting married and suddenly having in-laws. By sending the group members out during Lent, the group leader can fill the group with new people. Then, when any group members come back to the group, they have essentially a new group.

Whether your church observes Lent or not, giving up your group for Lent will be a healthy experience for both new and established group members. You could even call it a small group vacation.