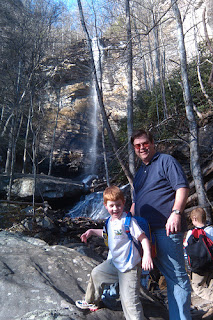 
You need to persevere so that when you have done the will of God, you will receive what he has promised. Hebrews 10:36


On a beautiful Saturday a few weeks ago, our family decided to go on a hike at Jones Gap. We didn’t have a trail map, but we had a trail head and that was good enough. Our little clan of five, the youngest is three, headed out. And then, we reached a fork in the road.


The blue trail was five miles long. The red trail was shorter and led to Rainbow Falls. The kids were all for it. We set out like Dora the Explorer: across the streams, up the mountain, to the waterfall. About 30 minutes later, legs were beginning to ache. Maybe this wasn’t such a good idea.


We climbed higher and higher, but we weren’t quite reaching the very top of the mountain. I asked another hiker how much higher the trail went. He told me that we were about as high as we would go, but that the falls were only five minutes ahead. What?

Once we made it back to the car (only 80 minutes after the trails were closed, but who’s counting?), I decided to investigate what we did. I discovered that we had hiked for five miles, ascended 1,000 feet, and had conquered a “strenuous” hike. It’s a good thing we didn’t know that going in. “We can’t do that Rainbow Falls trail. It’s a strenuous hike. Our kids are nine, five and three. We’d better stay on the easy trail to Jones Gap Falls.” You know what I’m saying.


As a result of that day, our family is ready for another hike. We probably won’t conquer the “highly strenuous” trek to the top of Table Rock just yet. But, we are confident in tackling anything that is strenuous or less. Not a bad start for a three-year-old.


Our lives are much the same. As believers, we know that we will follow God. We know that we want to fulfill God’s vision for our lives. We don’t know all of the twists and turns. We don’t know how far there is to go or what obstacles we might face. But, what we do know is that God has a plan, and we’re in it.


What seems impassable in your life these days? Where are you running out of steam? What appears too strenuous to climb? Don’t give up. The payoff might be just around the corner.