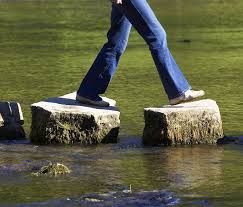 What’s Next Will Determine What Lasts

If you haven’t decided what’s next for your groups, then prepare yourself for a hard landing. This is the time of the year where the celebration of new groups ends with a deafening thud, unless you’re prepared for what’s next.
For some reason when we invite people to lead a group for a six week study, they get this crazy idea that once the six weeks is over, they’re done. Where would they get an idea like this? The same is true for a semester-based groups. Where are they headed in the next semester?
You see all of this grouping, de-grouping, and regrouping is really an exercise in futility. It produces an effect I refer to as Ground Hog Day after the namesake movie starring Bill Murray. If people are already meeting together and they like each other, then we should encourage them to continue, not break up.
Now a few folks who signed up to lead for a literal six weeks will object: “This is like bait and switch.” My response is something like, “That’s because this IS bait and switch. Do you like meeting together? Then, continue. If you don’t like meeting together, then go ahead and end the group this week. Life is too short to be stuck in a bad group.” If they really can’t continue with the group, then ask if a group member could take over leading.
If your groups are still in your Fall series or semester, then introduce a next step right now. Whether the next step is an off-the-shelf curriculum you purchase, a church-wide study in the new year, or a weekly sermon discussion guide, invite your new groups, especially, to pursue one next step. Don’t offer 12 different choices to new groups. The decision you want them to make right now is whether the group will continue, not what they will study. Established groups can follow what you’re set in place for a curriculum pathway or library. Established groups need choices. New groups won’t have an opinion, so choose for them.
Before the group disbands at the end of the current series or semester, ask the group to decide about continuing. If you wait until after the study ends, then you have a much lower chance of getting the group back together for the future.
With the Christmas season upon us, have groups focus on group life rather than group meetings. The new series might not start until January, but the group can meet socially, have a Christmas party and invite prospective group members, or serve together. Then, in January, they can continue their regular pattern of meeting. If the group insists on doing a Bible study between Thanksgiving and New Year’s Day, then encourage it. Most groups will not take this option, but a few might.
You can avoid the disaster of Day 41. You can avoid experiencing Groundhog Day for your next series or semester. By offering a next step now, you can retain more groups, then build on what you’ve accomplished this Fall.