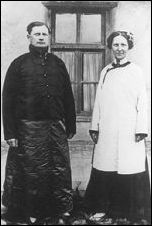 “Churches have cancelled their Sunday school classes, Sunday evening services, and some have even abandoned their Midweek service because they have small groups now. How am I supposed to tell people about my missionary work and raise support?” While Fred didn’t say these things directly, this is what I heard. Having started over 14,000 small groups in churches in the last four years, I was more than a little implicated here.
Now, the purpose of our lunch was not a confrontation. Fred and I have been friends since college. South Carolina is his home district, so we see each other every four years when he is itinerating here.
We grew up in a denominational church where missionaries raised their own support. They are faith-based missions. If God had called them, He would certainly provide. Unlike the Cadillac missions programs where missionaries are fully funded and spend all of their time doing the work of their calling, this denomination calls on their missionaries to work for four years, then take a year to raise support. During that year, they are required to speak in at least eight church services per month.
In the good old days, missionaries could easily hit at least three services per week: Sunday morning, Sunday evening, and Midweek. But, things have changed. As Sunday evening services and Midweek Bible studies have declined, small groups have taken up the slack. Well, or else, people are attending the weekend service and doing little else in terms of their spiritual growth. Either way, with only four or five Sunday morning services in a month, it’s getting harder for missionaries to get eight services per month. How do they get their message out? How do they raise support?
Feeling partially responsible for Fred’s dilemma, we brainstormed a little over burgers and Cajun fries at Five Guys. How do missionaries reach church members when they don’t have access to them? Since small groups are off-campus in many cases, how can missionaries connect with them? We came up with a couple of ideas.

Without going heavily into a missions message, what could missionaries simply produce and offer to small group members? This doesn’t need to be high production, but it does need to be high felt need. The curriculum could focus on a cause to live for and tell the missionaries story in the process. The topic could also deal with common issues small group members face like relationships, conflict, stress, parenting and any number of topics. Of course, missionaries would also want to include a video or information about their ministries. After all, the small group is receiving free downloadable curriculum from the missionary who sponsored the project. Here are some other thoughts on creating curriculum.

3. Pastor – would open part of your services to a missionary?

Most missionaries I know can’t even get through to a Senior Pastor. We all understand pastors are busy, but could you at least take their calls and hear them out? God will provide for the needs of missionaries, but more often than not, this provision comes through local churches.
Now, I understand after sitting through many missionary services as a kid that missionaries need to tune up their presentations. Slide presentations of villagers in foreign lands did not hold my attention as a child. Instead missionaries could hold the congregations for ransom: “If you don’t support me, I’ll get out my slides.” But, there are more compelling ways to tell stories.
Again, video is a huge key — not just to show a video in a service, but also to distribute the video via Youtube and other social media. Tell a compelling story, and people will flock to you. Use Facebook and Twitter to your advantage. Get your message out there, missionaries.
Maybe some missionaries are already doing this, but I haven’t seen it. If you are a missionary effectively using video to tell the story of your life’s work, then comment to this post and let us know what you’re doing. I mean it.
Now, about my friend, Fred Kovach, he leads an organization called Beyond the Borders, which leverages technology to reach people for Christ, disciple them, and train them. Fred and his wife, Crystal, serve as media missionaries with Global University, working with Assemblies of God missionaries world wide to provide technology tools to reach local communities with the Gospel. The Kovach’s also travel overseas to provide technical support to missionary television studios. For more about their ministry, go to: http://www.fredcrystal.com or http://www.globalreach.org/.