What If You Have Someone with ADD in Your Group? 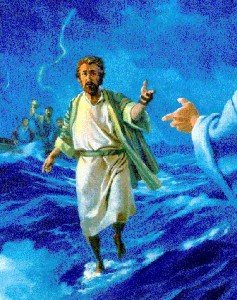 By Allen White
Have you ever had a group member who just exuded enthusiasm and ADD? Did they chase rabbit trails and pull thoughts out of left field during the

discussion? You may have a Promoter in your group.
We see classic Promoter behavior in the Apostle Peter. Impetuous and sometimes flaky, Peter was the only one who jumped out of the boat at Jesus’ invitation to walk on water. When Jesus announced his coming death, Peter rebuked Jesus, “Never, Lord!” he said. “This shall never happen to you!” to which Jesus rebuked him right back, “Get behind me, Satan!” (Matthew 16:22-23). When the soldiers came to take Jesus in the Garden, Peter drew his sword and cut Malchus’ ear, which Jesus quickly healed. Then, in the temple court, before the cock crowed three times, Peter denied Jesus. Yet there was another side to Peter’s brass enthusiasm.
On the day of Pentecost, when the crowd thought the 120 in the upper room were drunk, it was Peter who stood up and explained, “Fellow Jews and all of you who live in Jerusalem, let me explain this to you; listen carefully to what I say. These people are not drunk, as you suppose. It’s only nine in the morning! No, this is what was spoken by the prophet Joel…” (Acts 2:14-16). Peter’s off the cuff proclamation that day resulted in 3,000 people being added to their number. There was no time to prepare a sermon. There was no time to create an outline. There was only time for a disciple empowered by God’s Spirit to open his mouth and be willing to speak. This time Peter got it right.
In this series of posts, we are looking at the different personality types of group members and how they affect the dynamics of groups. Based on Vicki Barnes book, The Real You, we have identified four core types: the Producer, the Planner, the Peacekeeper, and today will will consider the Promoter.
The Promoter is the life of the party. In fact, a Promoter’s motto could be “If you can’t be with the one you love, then love the one you’re with.” Now, before you take that thought too far, what I mean is a Promoter can have a great time with family and friends, but can also have a great time standing in line at the Department of Motor Vehicles. Promoters have never met a stranger and are easy to like.
They have an idea a minute, which lends to their ADD temperament. Promoters are great starters, but poor finishers. After all, how can you take something to completion if you have an idea a minute. Before one thing is even half completed, they are chasing their next idea!
Promoters are great for adding enthusiasm to a group, rallying the troops, and recruiting new members. Promoters are not so great at staying on task, starting or ending on time, or maybe even remembering they are leading on a particular week. But, if you take a Promoter’s idea, pass it on to a Producer to execute, then add a Planner’s eye for detail with the Peacekeeper checking in with everyone, your group can be a great team.
Be selective about what you delegate to a Promoter. You will see them as flaky, and they will feel frustrated. But, put them in their sweet spot of brainstorming and encouraging, and then you’ve got something.
Read More About Why Your Group Members Might Bug You
Planner: What if Dr. Luke Was in My Group?
Producer: What if the Apostle Paul Was in My Group?
Peacekeeper: What if Father Abraham Was in My Group?