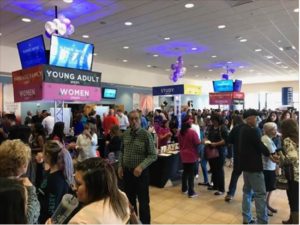 Many methods of connecting people into groups fail. By fail, I mean they don’t create lasting connections, which means every time you launch groups, you’re recruiting new leaders and connecting people to new groups. Here’s how this usually goes:
Step 1. A prospective group member turns in a sign up card, or requests a group on the church’s website, or selects a group from a small group directory.
Step 2. The church staff must either place the person in a group or send their information to the leader of an open group.
Step 3. The group leader may or may not contact the prospective member.
Step 4. If the prospective members are contacted, they may or may not show up to the group.
Step 5. If the prospective members show up for the group, they may or may not continue with the group.
Step 6. The Small Group Pastor/Director wants to jump out the nearest window.
At least this is how it’s gone in the churches I’ve been a part of. Typically, each step down the list cuts the previous number in half — 100 people sign up, then 50 are contacted, then 25 show up to a group, and then 12.5 continue with the group. Talk about diminishing returns!
But, this isn’t the worst of it.
In my zeal to connect people into groups, I’ve said things like, “Join a group. You’ll make some of the best friends you’ve ever had.” Yikes! I’ve actually had to go back and apologize for statements like that. Besides most people already have friends.
So, how do we connect people into groups if sign up cards, websites, and directories don’t work very well?

Everyone who has friends should start a group.

“Everyone is already in a group.” That’s the first sentence in my book, Exponential Groups. People have friends, neighbors, co-workers, relatives, and others they can do a study with. The people in your church are already connected. They just need some direction in intentionally doing something about their spiritual growth. An easy to use curriculum and an experience leader to coach them will take these leader-friends a long way in developing a “small group.”
If they don’t want to “lead”…
Then, they should join the group led by their friend. Personal invitation is an amazing tool for connecting people into groups that last. Even groups who will be open to new members should start with the leader personally inviting people.
Now, if you have someone who wants to lead a group but excepts you to give them a group, they probably have a teaching gift and need a class to instruct. This will not make for a good small group.
As Steve Gladen says, “Leaders have followers.” Encourage them to bring together their own group.
If they don’t have friends…
A group may not be the answer for them. Okay, let’s face it, counseling could go a long way. But, this isn’t everybody. Some folks are new to the community or new to the church, and they legitimately don’t know anybody. How do they get in a group? If they don’t know anyone, they can’t invite people, and they won’t get invited. Now what?
This is where a Connection event or Sampler comes in. By this, I mean an Open House environment where prospective members can meet group leaders face to face. They may recognize the leader from somewhere or vice versa. At a minimum, they get a sense of whether or not the leader is someone they want to hang out with for the next 6-12 weeks. Once they’ve decided, the prospective members sign up for the specific group they want to be a part of. No cards. No cold calls. The relationship has started. They know whose house they’re going to, and the leader knows who’s coming.
Conclusion
Efficient means of connecting people are not the same as effective means. Usually a task-oriented approach to forming relationally-based groups falls short. Forget group formation as a task. By forming groups in a relational way, groups will outlast how you were forming groups previously.
This last weekend, Tim Twigg, Small Group Pastor at Victory Worship Center, Tucson, AZ, held an awesome Connection event for prospective members to join groups (pictured). As a result of this event, around 500 people were connected to groups. Now, we’ll check back with him on this blog in a few weeks and see how many continued.