>In your anger do not sin: Do not let the sun go down while you are still angry, and do not give the devil a foothold. Ephesians 4:26-27


I like to avoid conflict. Sometimes I like to pretend that there is no conflict and just go about life like normal. But, unresolved conflict doesn’t go away. It’s the elephant in the room. It’s the mound of dirt under the rug. It’s the source of passive-aggressive behavior. Avoiding conflict doesn’t make anything any better.


But, when we enter the danger of conflict, chances are that feelings will be hurt, particularly mine. Who wants to volunteer for that?


If you’ve been to Caesar’s Head State Park in South Carolina, then you’ve probably wandered down a small wooden staircase into a narrow passage called “The Devil’s Kitchen.” You walk through a gap that’s only about four feet wide where the granite has split. 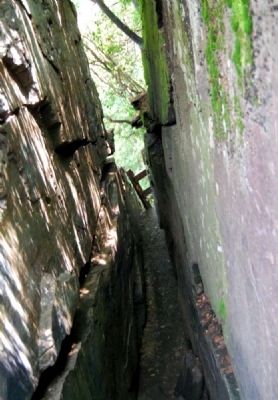 “The story goes that the devil himself used to brew moonshine on top of Caesars Head. He brewed a very potent brand of shine. It was so potent that he spilled a single drop of the shine on the overlook and it split the rock. So the split became known as the Devil’s Kitchen because this is where he cooked the strong brew that split the rock.” (Source: Southcarolinaparks.com )


Now, I’m not sure whether the devil actually brews moonshine, but I can definitely see the connection.


Unresolved anger creates a split in a relationship that gives the devil a foothold. One disagreement might not be as powerful as the drop of moonshine that created the Devil’s Kitchen, but drop by drop relationships are fractured until they eventually split.


The solution is easy, and yet it’s not. Don’t let things go on forever. In fact, don’t let any conflict that happened today, go beyond today. Don’t let the sun go down.


While it’s easier said than done, we need to man up or woman up and face the conflict head-on, especially if we are the offender. Whatever the issue is nothing is more important than the relationship. If the other person won’t hear you, take someone with you (Matthew 18:16). Preferably take a wiser person or a counselor. This isn’t a matter of proving who’s right and who’s wrong. This is about preserving the relationship and growing.