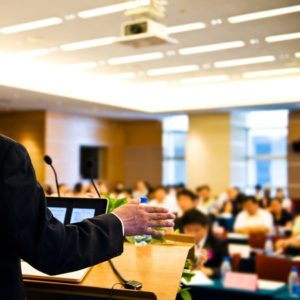 Photo by hxdbzxy via 123rf.com

The goal of every small group launch is recruiting new leaders and forming new groups. Maybe you are launching a church-wide campaign, a sermon-based series, or a variety of different types of groups, the commonality is getting a lot of new groups started very quickly. Whether you’ve chosen to lower the bar on leadership or to keep your requirements high, there are three priorities in briefing every new group leader. The establishment of these priorities will determine how many of these new groups continue.

Priority #1: Encourage Your New Leaders to Gather Their Own Groups.

The best way to determine the quality of new group leaders is by their ability to invite and gather their own group members. If they can gather their own groups, then more than likely they can keep their groups going. After all, the second best way to get into a group is by personal invitation.
While some small group pastors depend on church websites or signup cards to form groups, these methods are far inferior to personal invitation. I’ve served two churches over the last 25 years, a church of 1,500 in California and a church of 6,500 in South Carolina. Personal invitation worked best in both churches despite the size.
Groups of friends tend to outlast groups of strangers. Ask the new leaders to make a list of people they know who would enjoy the study. Have them pray over their list. Then, get them out there inviting.

Priority #2: Discourage Your New Leaders from Trying to Do Everything.

A lot goes into a group meeting — preparing and leading the discussion, cleaning a house, making a dessert, arranging childcare, reminding group members about the meeting, and there’s more still. If you’ve successfully recruited a bunch of co-dependent, “Martha-type” leaders, then they will very quickly burn themselves out in serving the group. If you don’t have a leader, then you don’t have a group. So much for all of that hard work on Priority #1…
Give the new leaders a chart listing the group meetings and the group responsibilities including all that were mentioned in the previous paragraph. Then, instruct your new recruits to inform the group that everyone is expected to sign up for something. If they ask, “Would anyone like to…?” The answer is an unequivocal “No!” But, if it’s expected of the group, then the group members will sign up and share responsibilities. Not only do you keep the new leaders from burning out, you can also identify potential leaders in the group.

The Coach is the new group leader’s lifeline. Without a coach, probably 30 percent of your new groups won’t even get started. How do I know? It happened to me when I started hundreds of new groups at a time. Then, you’ll lose another 30 percent after the campaign, because things came up they didn’t know how to deal with. That means only 4 out of 10 new groups will make it. It’s progress, but it’s not what it could be with a coach in the leader’s life.
Every new leader will face discouragement at some point. Some will struggle inviting group members. Others will face nights when half of the group doesn’t show up. Some will get stumped by a member they won’t know how to deal with. An experienced leader coaching a new leader will go a long way in resolving these issues and keeping the group moving forward.

A group leader briefing should be BRIEF! People don’t like meetings. Make the briefing convenient and brief. Whether it’s 15 minutes after a weekend service or a video you’ve posted online, think of what your new leaders need to succeed and not everything you could tell them.
If these are your three priorities to guide your new group leaders, you should have closer to 8 out of 10 new groups continue, if you offer them a next step.
Let me know what you think in the comments below. 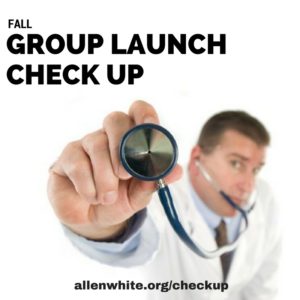 Are you ready for your Fall Group Launch?

If you’re not sure your launch plan will help you reach your goals, schedule a time with Allen White to help you think through where to go this Fall. Whether you need a few tweaks or a complete overhaul, Allen will guide you through the steps you need to launch Exponential Groups this Fall.
Find out more at: allenwhite.org/checkup