Twice as Many Group Members as Church Members? This Church Did It 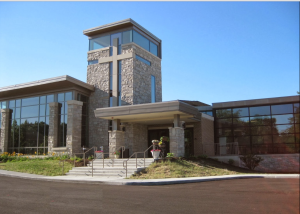 By Allen White
In partnership with Greg Hawkins, our team created a Pathway series for churches who wanted to draw their members into greater intimacy with God. Drawing from the work Greg and the

REVEAL team conducted when he served as Executive Pastor at Willow Creek Community Church, South Barrington, IL, We created a three part study based on the well-documented principles of REVEAL. The idea was to create a framework for any pastor to customize the series for their local church.
Pastor Don Wink, The Lutheran Church of the Atonement, Barrington, IL, came to us wanting this exact series. He wanted to see the 300 adult members of his ELCA congregation draw closer to God and to form an on-going small group ministry there.
Don along with his staff pastors and volunteers shot all 18 complete sessions including teaching, host introductions, testimonies, and leader training in a two day shoot at their church. All of the sessions were both scripted and personalized for their team and their church.
The Atonement team revised the original study guide manuscript to fit the language and culture of their church. This included a personal introduction from the pastor along with hundreds of photos representing church life. Our team compiled all of these materials and designed full color study guides to go along with the series.
The first study in the series, Faith, was launched in Fall 2014. Pastor Don and his groups team challenged their congregation to fully participate in the series by gathering their friends in their homes for not just a six week study, but a year of transformation! Don held interest meetings with stakeholders both in his home and at the church. He also made an invitation to the entire congregation. Group hosts attended briefings where they received their marching orders and materials.
The church had duplicated 600 copies of their study guide. When the dust had settled, this church of 300 adults had distributed 580 study guides. But, the story gets even better.
In January 2015, the second installment of the Year of Transformation series was launch, Hope. All of Atonement’s current groups continued except for one group. Not only that, all of the existing groups added members for the second study. This continuation was far more exciting than the original launch.
What could your church do?