Before You Launch Groups This Fall

The Fall is the biggest season of the year to launch groups, but before you launch groups this Fall, you need to plan ahead. Over the years, I’ve seen churches pull out all of the stops for a Fall campaign only to watch the small groups ministry shrink back to its former size after the six weeks is over. I don’t know about you, but so much work goes into a Fall launch just to watch the results disappear is disappointing. And, you certainly can’t make disciples in six-week once-a-year groups.

If you follow a church-wide campaign or an alignment series model, the draw is usually the short-term experience. Your people have a chance to kick the tires and see what groups are like. People who don’t consider themselves as leaders can take group leadership for a test drive. These are great ways to plant seeds for small group ministry. But, unless you have a way to bring in the harvest, you’ll be planting and replanting seeds year after year after year. I refer to this phenomena as Ground Hog Day. While it’s great to give your people a trial run at groups, the trial run is not an end in itself. If they like groups, then what do they do next?

To keep new groups going, you have to offer them a next step. In the middle of the first six-week study, offer them another study for their group to continue. With new groups, you should choose the study for them. Most new groups I’ve led typically don’t have much of an opinion of the first two or three studies they do. Just choose a study for them. Otherwise, they’ll get lost in the study choices that are out there. If the group doesn’t decide to move forward while they’re still in their first study, they probably won’t continue. You want the group members to decide to continue before the end of their first six-week study. As far as established groups go, they can continue with their normal pattern after the campaign ends.

In choosing a next step study for your new groups, if the groups started with a video-based study, then you need to offer a video-based study as a next step. Eventually, the leaders will gain the training and experience to lead other types of studies, but initially the goal is to get the group to take the next step without having to consider any other factors. But, for now, if they started with video, then give them more video.

The next study could be a sermon-based discussion guide with a short video from the pastor. The group could simply download the discussion guide, click the link to watch the teaching video online, then discuss and apply the topic. Some of the churches I’ve worked with have actually recorded these videos between the Sunday morning services on a smartphone, then uploaded the video directly to Youtube or Vimeo. Other churches shoot the video before or after the weekend with the pastor in a studio or in a living room. You don’t need to plan out and shoot the entire series. You can just make the videos and write the discussion guides as you go. This is a great way to help your people take their weekend into their week.You could also create a video-based curriculum about what it means to be a small group at your church. This could become the standard next step for every new group that starts. While I’ve talked to a lot of pastors over the years who were interested in this, nobody actually created one. So, I decided to take the hard work out of doing this for you. Next week, I am releasing Community: Six Weeks to a Healthy Group. This is the second in a series of Do It Yourself curriculum I’ve created. The video scripts are written. You just need to shoot the videos. Then, you can purchase the study guides at allenwhite.org/community. (If you are interested in a custom version of the study or need help with video production, contact us here.)

You can also purchase curriculum for your groups or use a curriculum from a streaming video service. Again, you want to choose something that is relevant to a new group.

If your campaign or alignment series starts in late-Summer/early-Fall, then you can offer another six-week series in the Fall that will end before Thanksgiving. It is nearly impossible to keep groups in studies between Thanksgiving and New Year’s Day in the U.S., so the study will need to conclude by Thanksgiving. If your campaign starts later in the Fall, then end the first six-week study before Thanksgiving and start the next step study in January. You will still want to invite groups to continue in the next study while they are in their first study this Fall. Secure a commitment from the groups to continue with the new study in January, then offer some suggestions for what they can do during the Christmas holidays as a group.

If a group will do two back-to-back six-week studies, more than likely they will continue on as a group. If you don’t offer them a chance to continue, then more than likely the group will disband. You’ll have to start over again next year. A next step study will make all the difference in keeping your new groups going after a Fall campaign. Don’t miss this step. 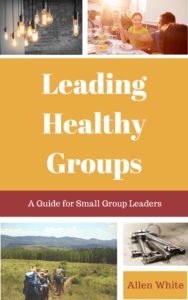 What is a Healthy Small Group?

I suppose if you’re going to lead a healthy small group, it would be a good idea to know what a healthy one looks like. Plenty of examples come to mind of unhealthy groups — groups where one member dominates the discussion; groups that have great Bible studies, but don’t live out what they’ve learned; groups that become unto themselves and never attempt to reach others; and groups that just hang out, but really don’t ever move in any direction. But, our focus is on health, not the opposite.

Every person matters to God and should matter to your group. Some group members might be a little rough around the edges or challenging to meet with, but none are less important or more important than anyone else. God has a reason for putting them in your group. Groups have to accept people where they are, because they can’t accept them anywhere else, can they? Acceptance is communicated through listening and giving equal time. Acceptance is expressed through intentionally getting to know those who are different from you instead of instantly gravitating toward those you are fonder of. Jesus directed groups this way, when he said, “Love one another” (John 13:34) and “By this everyone will know that you are my disciples, if you love one another” (John 13:35). Jesus modeled this in who he associated with: tax collectors like Matthew; sinners like adulterers and bad hand washers; Samaritans who were racially different; and many others who the religious establishment looked down upon. Acceptance is one of the most precious gifts any person can give another. Healthy groups accept others.

Healthy groups center themselves on God’s Word, the Bible.

One of the key purposes of a healthy group is to become more like Christ. Every group has three powerful resources at their disposal to grow in Christlikeness: the Bible, the Spirit, and the group. Paul writes, “Do not conform to the pattern of this world, but be transformed by the renewing of your mind” (Romans 12:2). This transformation takes place through each person’s willingness to surrender, the direction of Scripture, the power of the Spirit, and the support of the group. These ideas will be more thoroughly explained in Chapter 5. Regardless of the type of group you lead, these elements are essential for healthy groups to make disciples.

Healthy groups are serious about helping their members grow.

(and group members are open to receiving help). This could involve encouragement and support to start a good habit or break a bad one. This can also involve confronting sin in the lives of their members. For most people, encouragement is much more appealing that confrontation. While the group should accept people as they are, the group should also love them enough not to leave them there. As the group grows in their relationship with others and their relationship with God, the group cannot shy away from hard things. Healthy groups are serious about help.

Healthy groups live like Jesus was serious about what he said.

When Jesus told his disciples that out of 633 laws in Scripture only two rose above the rest: love God and love others (Matthew 22:37-39), he intended for his followers to love God and love others above all else. Jesus wants his followers today to treat “the least of these – the hungry, the naked, the prisoner, and others who lack basic needs” as if they were serving Jesus himself (Matthew 25:31-46). While taking all of Scripture into account, Jesus wants his disciples to surrender themselves to God and live life in a selfless way. He wants his followers to “go and make disciples,” baptize them, and teach them to obey all Jesus commanded (Matthew 28:19-20). What if these weren’t just suggestions for better living? What if these weren’t merely nice platitudes where you could hit a mental “like” button? What if Jesus was serious about what he said? What if he expects his followers to actually do it? Obeying Jesus is a sign of group health.

Healthy groups are on mission.

The group is not just about itself. Groups members should constantly seek out people they and the group can serve. Who is the next person to invite? What neighbor needs help? Where can the group serve together locally or globally? Sometimes the greatest coping strategy for dealing with life’s woes is to focus on someone other than you. When groups align their mission with Jesus’ mission, they benefit from walking in obedience to Jesus’ commands. They benefit those who they serve. But, most of all, they benefit themselves with not only the blessing of obedience, but with a new depth of understanding God’s teaching through their experiences.

This is not a popular topic among small groups in North American culture where groups want to stay together forever. I both understand and respect that desire. It’s natural to form a bond and “keep the family together.” But, it’s supernatural to think of others and the groups they will need. I don’t mean to sound spooky, but our connection to God is supernatural. His guidance through prayer and the Bible is supernatural. This makes identifying and developing new leaders possible. This causes hearts to change in favor of every disciple making disciples. To reach the world, and especially the next generation, this sort of selflessness is required. Every group should seek God about its direction and its future.
Your group may find other values in addition to these that you desire to integrate into your group life. You can certainly add these to your Group Agreement. But, don’t replace any of the priorities mentioned here.
That’s a lot to think about. These are things to focus on and strive toward. The accomplishment of all of these things will take a lifetime. But, on the other hand, nothing will ever be accomplished if you don’t start today. Today is both the culmination of what your life has become and the first step toward what you life will be. Your group is a big part of that.
Pre-order at 30% off and free shipping before 8/15/18 here.
Order the paperback or Kindle edition on Amazon starting on 8/15/18.